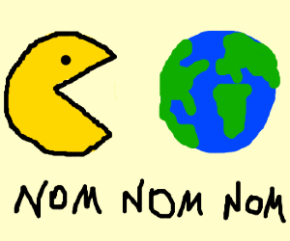 In 2010, venture capitalist, Marc Andreesen wrote an article in the Wall Street Journal stating that:  “software is eating the world.”  Andreesen, an investor in Facebook, Twitter, Foursquare and many other consumer facing software companies, proclaimed that we were in “the middle of a dramatic and broad technological and economic shift in which software companies are poised to take over large swathes of the economy.”

Four years later, these software companies are having a dramatic and transformational effect on entrepreneurship and business in the U.S.  Now, “content is eating the world,” and actually content has devoured the world.  If you speak with a high school or college student about their mobile phone lifestyle, they’ll tell you that every moment of their life gets turned into a social object shared in Snapchat, Instagram or Vine.  While a hobby for many, these platforms are flooding the world with creative opportunities for people to launch careers, themselves and products to a global audience.

In order to capture the essence around the influencer economy, you have to understand that social media is in its early to middle stages.  We have not even reached adolescence, if social media were translated to human years.  It’s crazy to consider that it’s only just begun.  Some stats:

The Apple iTunes Store eclipsed 1 billion podcast subscriptions across 250,000 unique podcasts.  That’s with a total of 8 million published episodes and in 100 languages!

In 2013, Kickstarter received $480 Million in pledges with 19,911 projects funded. Within both Kickstarter and Indiegogo (the 2nd largest crowdfunding platform), users have created 154,000 total projects over the 4 year history of this nascent industry.  With Kickstarter alone, project makers in 214 countries created projects reaching all 7 continents.

We’re in the middle of a seismic shift towards content around everything that we touch in the physical world.  Whether its user-generated or professional grade content, everything in our house, TV screen or job has a supplemental piece of content around it.

If we want to check-out a new sushi restaurant in West L.A., I search Foursquare tips or Yelp for user-generated content reviews/tips.  If we want to explore a new 4K TV to see if it lives up to the hype, I read tech blogs for CES reviews.  If I want to train myself on Garage Band, Final Cut Pro or learn about how to play Minecraft, I scour YouTube for how-to videos.  The knowledge-based world is right at our fingertips.  Social networks have created a surplus of content, and we’re just in the beginning.

When looking at tech companies stock prices, Yelp ($Yelp) is trading at $90, Facebook ($FB) at $60, and Twitter at $50 $ (TWTR).  They are all content-based networks, based on the user-generated content of billions of users.  In fact Facebook acquired a 30 million registered user content network 2 years ago, when it bought Instagram for $715 million.

The factor that is Amazon ($AMZN) is full of user-generated reviews, and they started as a bookseller, which is content.  They new have even built their own premium smart TV app:  Prime.  They’re trading at $360, one of the higher tech stocks.  And Netflix ($NFLX) is at a record high $430 dollars, and they are – you guessed it – a premium content network, that’s disrupted traditional TV and film.

The world has been eaten-up, and it’s only the beginning.  With Whisper, Snapchat, and Secret, networks around creating content are still launching.  If you’re looking for a career or job in the evolving media-landscape, start creating right now.

Depression and Entrepreneurs with Brad Feld

Influencer Economy Book Launch: How to Launch, Share, and Thrive in the Digital Age

Dan Ariely: Payoff & The Hidden Logic That Shapes Our Motivations

Subscribe for a FREE Chapter of The Influencer Economy